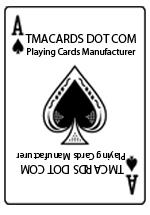 The word "Ace" comes from the Old French word 'as' (from Latin 'as') meaning 'a unit', from the name of a small Roman coin. It originally meant the side of a dice with only one mark, before it was a term for a playing card. Since this was the lowest roll of the die, it traditionally meant 'bad luck' in Middle English, but as the ace is often the highest playing card, its meaning has changed to mean 'high-quality and excellence.

Historically, the ace was the lowest value, and this still holds in many popular European games (in fact most European decks, including the French Tarot Nouveau, do not use the "A" index, instead keeping the numeral "1"). However, in most games popular in the United States and English-speaking countries, aces have the highest value of all playing cards in a suit.